Warning: A non-numeric value encountered in /home/customer/www/symphonyofsoul.org/public_html/wp-content/themes/Builder-Air/lib/builder-core/lib/layout-engine/modules/class-layout-module.php on line 499

Symphony of Soul is devoted to nourishing the soul through the healing and inspiring power of the arts. Symphony of Soul provides live music or “musical medicine” to people who are confined in care centers.

Dedicated to lifting the spirits of people facing challenging circumstances, our musicians bring live music to convalescent homes, hospitals, centers for the developmentally disabled, drug and alcohol rehabilitation centers, psychiatric facilities, and shelters for women, children, families and the homeless. Our performances take place in lobbies, cafeterias, hospital wards and activity rooms for groups ranging in size from 5 to 50 and up to an hour in length. We are proud to offer a stipend to our musicians for these performances. 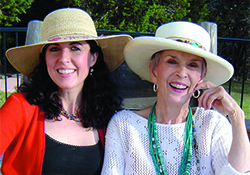 In May of 2000, music changed its tempo and transposed itself into an entirely new key for singer, actress, artist Leslie Hyland-Rodgers. “Les, I’m so terrified. I don’t want to die. Would you sing to me? Perhaps it might make me feel better if you’d sing to me.” Sitting at her mother’s bedside at MD Anderson Cancer Center in Houston, Texas, Leslie’s heart broke to hear such fear in her mother’s voice.

With her eyes closed, Leslie softly and meditatively sang prayerful words and melodies to her mother. She opened her eyes to discover that the nurse had opened the door to the room and the other cancer patients on the ward had gotten out of their beds and were standing outside the doorway listening.

In that moment, Symphony of Soul was born.

Inspired by her experience at MD Anderson Cancer Center, Leslie Hyland-Rodgers founded Symphony of Soul in the summer of 2000. She created the organization as a means of serving two groups of people: her fellow artists and individuals who are confined to institutions. Well acquainted with the struggles and successes of a life in show business, Leslie wanted to create an opportunity for local artists that would allow them to share their gifts with others in a meaningful and dignified manner while also receiving extra income to support their craft. Leslie noted an untapped market in hospitals, shelters, rehab centers, retirement homes and other institutions where people are feeling lonely, fearful, isolated and depressed and greatly in need of the healing that music can provide.

In the beginning, Leslie gave most of the presentations on a volunteer basis, while tapping into her personal finances in order to pay her pianist to accompany her. In the lobby, cafeteria, hospital ward or activity room of an institution, Leslie presented an hour-long vocal concert that infused a mixture of show tunes, spirituals, classical and folk music with her up-beat humor and theatrical flair. With every concert that Leslie gave, she noted the positive response from the audience and the obvious hunger for music in the lives of those who are confined to care centers. Committed to the mission of Symphony of Soul, Leslie has gradually expanded the roster of musicians and care centers, and she continues to grow and nurture the organization to this very day. She volunteers her time to running Symphony of Soul as its Executive Director.